2Let2 97 Wyeverne Road Cathays Cardiff CF244BG is the AGENCY YOU SHOULD AVOID!

Whether you are looking to rent a student house share or your house as a professional, you will be deceived and regret your choice.

Emma M from San Francisco: do not go with this company. 2 and a half years still waiting on my deposit. tried to move us into an unfinished house (a literal building site) and had to be put in an absolute shithole for 2 weeks while they sorted it. slow with maintenance issues, all have an attitude and never, i repeat never call you back when they say they will. absolutely awful letting agents, save yourself the hassle and go with someone else.

Anonymous T regrets his decision: Meh. I'd advise against!!
2let2 were quite helpful when it came to looking for properties but thats where it ended I guess. Myself, my boyfriend and my 2 friends wanted a 3 bedroom house or flat, which they found 2 or 3 to show us. The houses we went to still had tenants, who were not informed we were coming which made it awkward for them and us. The houses we saw were poorly finished, the carpets were mismatching (several carpets placed together like a puzzle just to cover the floor), the wallpaper was outdated and the bathroom and kitchens were in serious need of a revamp. The tenants had kept it looking as clean and tidy as possible and it still looked awful, bless them.
We eventually found a flat that had no tenants which was a work in progress which we were told would be completely brand new and finished by "the best landlord we have!" pfft. We took the property as it seemed the best option and turned up to move in to a bombshell.
The cooker wasn't fitted, the skirting boards were just placed on and falling off, none of the woodwork was painted at all, there was no lock on the bathroom door or a toilet roll holder. There were no handles on the front door meaning we had to slam it shut and make a racket. we also later discovered the hideous ill-fitting sofa covers were hiding the most disgusting stained ikea sofas. The washing machine we had been promised was not in the flat for weeks, and when it got here it looked like it had come straight from the tip and was unusable until we bleached the entire thing! It was generally a joke.
We then had to have workmen in for the next 2/3 days doing jobs that should have been done in the 4 months before they knew we were moving in.
We moved in 4 months ago and STILL none of the woodwork is painted, the boiler has broken too many times to count, our shower leaks and the place is generally unfinished and looking bad.
After arguing with our landlord a few times over his workmen being incompetant (the same man has come to "fix the boiler and shower" about 4 times and its still broken), we went to 2let2 about the issue and fair play they got on his back to do it, though we had to physically go to the office.
They probably arent the worst letting agency in cardiff but they certainly arent the best, nor are their landlords up to any kind of standard! Ive heard bad things about people not being able to get their bonds back due to "labour charges" so god knows what will happen when our tennancy is up.
I wont be renting with them again!! 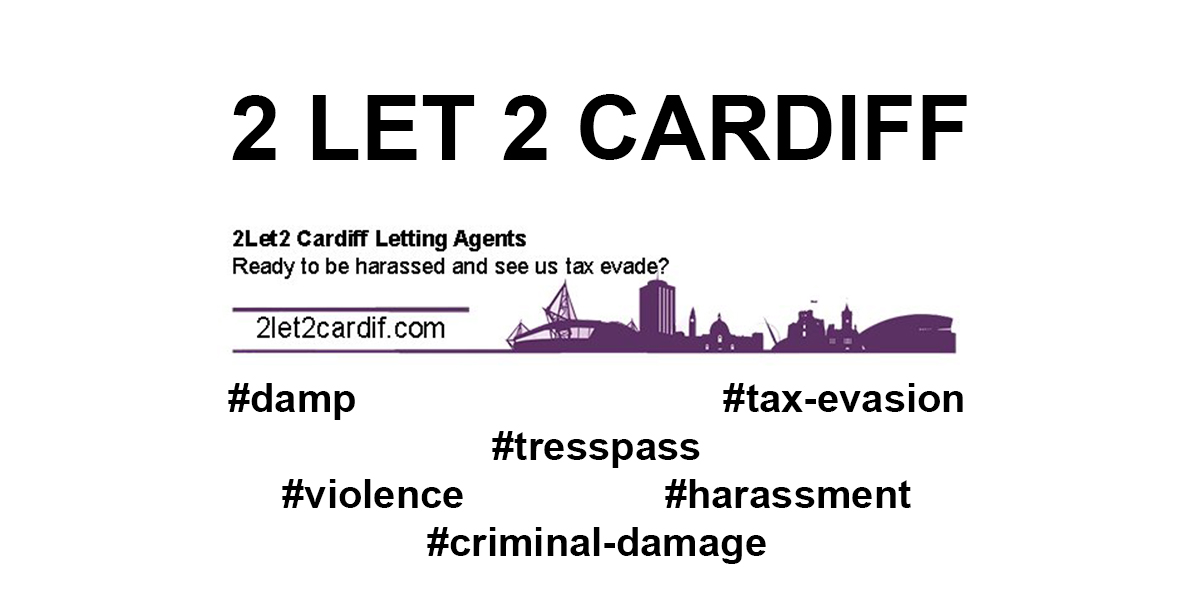 Stephen Casey: A rat infestation reported to the letting agency and they failed to tell tenants when they would send someone out. No sense of urgency, phone calls go unanswered, rude staff… leaving tenants at risk of disease, emotional distress and damage to property and loss of belongings.

Michael Evans: Completely lied to by staff. Signed a lease as they said to us that the kitchen and bathroom were being redone and would be brand new by time we moved in and this was the reason we signed the lease, they were not and they were low quality and damaged. Flat dirty when moved in. Mould on walls and affected personal items. When discussed with staff we were laughed at and told that they never said that, and that if we wanted to fix the mould issues we had to do it ourselves. No help from staff, luckily after 6 weeks of us cleaning and doing as much stuff to the flat as we could we were able to find someone else to take the lease so we could move out. These are not professional people and are completely horrible.

Curtis Mills: Crooked agents! Very pushy when viewing houses, “you need to put a deposit down now or the house will be gone”. This is simply not true. Whenever the house needed routine maintenance/repairs 2let2 never sent anyone. And good luck getting your deposit back, the amount of made up charges, charges for damage that was already there and charges for general wear and tear! STAY AWAY AT ALL COSTS

Clement Julia: Cut all contact with us once they moved us in. Had a slug problem: no response. Never showed us where the water meter was: no response. They were fine scheduling viewings at 6 though, but don't expect them to reliably show up. You're better off using the letting from the student union

Dave Morgan: Tried to pressurise my boy and hos friends into putting money down to secure a property. Any decent agency wouldn't do that.

James Odeinde: The properties are pretty grotty, no attempt to make them a half decent standard for students. Staff there are rude and most of the time clueless and lazy

A: After spending 2 years with 2let2, I have to rate them 2/5. Me and my house mates have had so many issues regarding housing. During the first few months in our first house it was damp, filled with mould, very unpleasant smell and the shower would leak down to the fire alarm which would then set off the alarm. Luckily, we were given the opportunity to move houses as another house was available for us to move into. The second house had a few issues throughout the year but were we assisted with any concerns. However, at the end of our first year with 2let2 we were overcharged due to things such as broken lights, stained walls and broken window blinds which were not our fault. Our second year with 2let2 was okay, I have to say the response we got regarding any issues we had was very quick and maintenance staff were amazing. Some of the office staff were amazing, helpful and very friendly however others were quite unfriendly and rude to talk to.

Marin Le Nabasque: Worst agency for students : the houses are unsanitary, and they charge fees from nowhere. 0 honesty. Judge Rinder already have contacted people who have been the victim of this agency, just saying

B Beno: Cowboy letting agents taking advantage of students. House was infested with rats which they well knew before renting the house to us. Avoid at all cost and pay that little but more from companies like Living room.

Tomos Carruthers: Lived in Cardiff for 4 years- 2let2 are the worst letting agents I have been with. Terrible house, terrible customer service and overcharge the end of year fines, which we had to take legal action against them.

Jamie D: Phoned up and agreed a time for a viewing. Waited 25 minutes, no one turned up or answered the door. Phone 2let2 multiple times but no answer and the 4th phonecall was picked up and immediately slammed down. Will not be using them again.